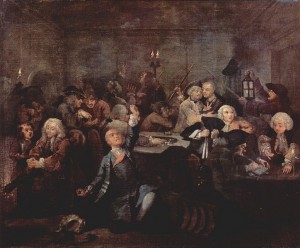 The next time you bite into a sandwich imagine yourself magically transported to London in 1762, where you and your friend John Montague, the Earl of Sandwich, have gambled for hours at the gentlemen only Beef Steak Club. Frustrated and hungry, Montague pleads for something to eat (I’m guessing beefsteak). The problem is that the Club forbids eating at the gaming tables, and the Earl doesn’t want to interrupt his gambling.

Montague insists that the waiter bring beefsteak* to him placed between pieces of bread, promising that the bread will soak up the grease and not tarnish the playing cards. You and your fellow gamers are so taken by the idea that you all order “what Sandwich has.” By morning the meal has been tagged “The Sandwich.”

Actually, the Montague’s notion was not entirely original; single slices of bread served with cheese had been a common European snack for several hundred years. It was that extra slice of bread with warm salted beef in the center soaking up the tasty grease and served as a single item that made it a culinary first.

Two thick slices of bread with meat or poultry in between soon became fairly popular in England and France, but it was almost 200 years later before a creative and tenacious American named Otto Frederick Rohwedder revolutionized the sandwich.

A jeweler and determined inventor from Ohio, Rohwedder dreamed up the idea of a commercial bread slicer. His first attempt burned up in 1917, but he persevered for nine years, finally persuading his friend and owner of Missouri’s Chullicothe Baking Company to try out a second machine that not only sliced a loaf of bread but also wrapped it in plastic to keep it fresh. The loaf was called Sliced Kleen Maid Bread, and it was a huge hit marketed for morning toast and lunchtime sandwiches. Rohwedder started a company that manufactured the slicing machines and filled orders from around the country. Two years later Wonder Bread manufactured its own machines and sold sliced and bagged bread across America; the sandwich was on its way to becoming an American staple.

Portable and designed to hold basic elements of an entire meal in hand, sandwiches of all sizes, shapes, definitions, ethnic origins and a wide range of quality are part of the daily American experience. For the next few weeks we will look from several perspectives at what the Earl of Sandwich’s hunger and dream for the next winning card inspired.

*At that time most of the beefsteak served was brisket that had been salted to retard non-refrigerated spoilage. It was similar in taste to today’s corned beef.