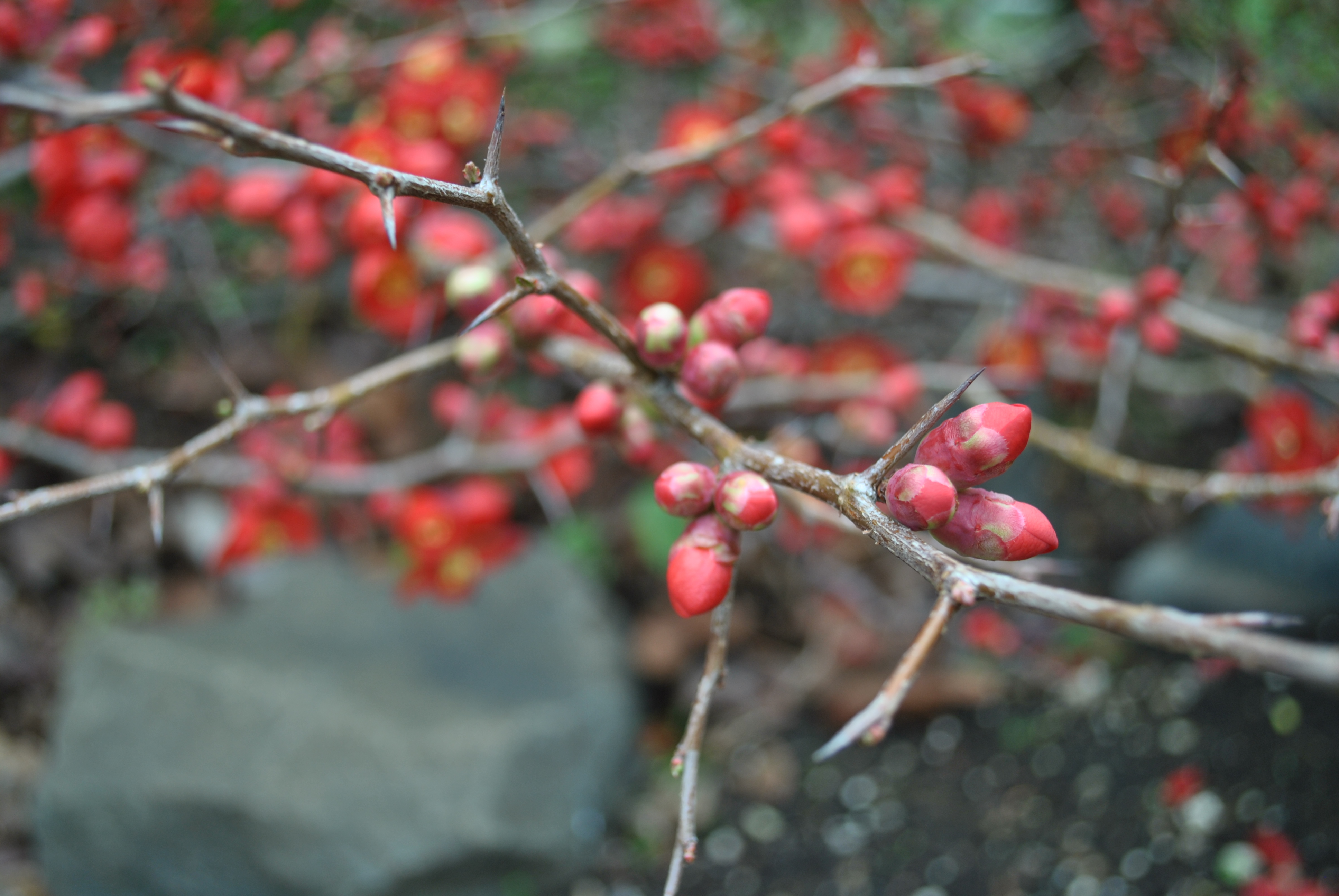 Chaenomeles is a flowering woody perennial that is underutilized and unappreciated in Pacific Northwest gardens. It seems strange since it would be a good fit for a range of garden styles. Obviously, it would work in a Chinese or Japanese garden, but it also looks perfectly at home in a cottage garden or a woodland garden. Where I do see it used, unfortunately it is often pruned into a ball. What kind of garden style is that?

As far as being able to ask for chaenomeles by its botanical name in the nursery, it might be easier to just ask for flowering quince. I’ve heard chaenomeles pronounced several different ways: kee-NOM-uh-leez, kee-no-MAY-leez, kie-no-MAY-leez.

Chaenomeles comes from the greek word for “split apple”. Although the fruit is edible, it must be processed into a jam or a chutney in order to enjoy it, so it is usually grown for its ornamental qualities. It can even be trained as a bonsai, trained to espalier on a wall, or planted as an attractive deterrent to dogs, cats and people. Once the flower buds are swollen on the branch they can be forced indoors for a cheery arrangement. The branches near the top of the plant are usually best for this purpose. The color of its delicate late winter-early spring flowers ranges anywhere from white to whitish green, apple blossom pink, peach, salmon, orange, orange red, red. Because the flowers darken as they age, some varieties have dramatically different colored blooms on the same branch. Some varieties have thorns, some do not.

There are over 500 named varieties of chaenomeles. One of the most popular and widely used is probably Chaenomeles x superba which is a cross of Chaenomeles speciosa and Chaenomeles japonica. Chaenomeles x superba has been around since the 1500s when it was first bred by Japanese gardeners. Chaenomeles was introduced into European gardens in the late 18th century. With such a long history of human intervention and so many varieties, you have to wonder if anyone knows exactly which flowering quince is growing in their garden. Even in nurseries it is sometimes misidentified, and so although it is less expensive to buy a bare root flowering quince, I would wait and spend the money to purchase one that I can see in person during its bloom time. That way, no matter what variety it actually is, I’ll know I’m getting the one with the habit and colors I want.

In my garden I have Chaenomeles x superba “Cameo”, 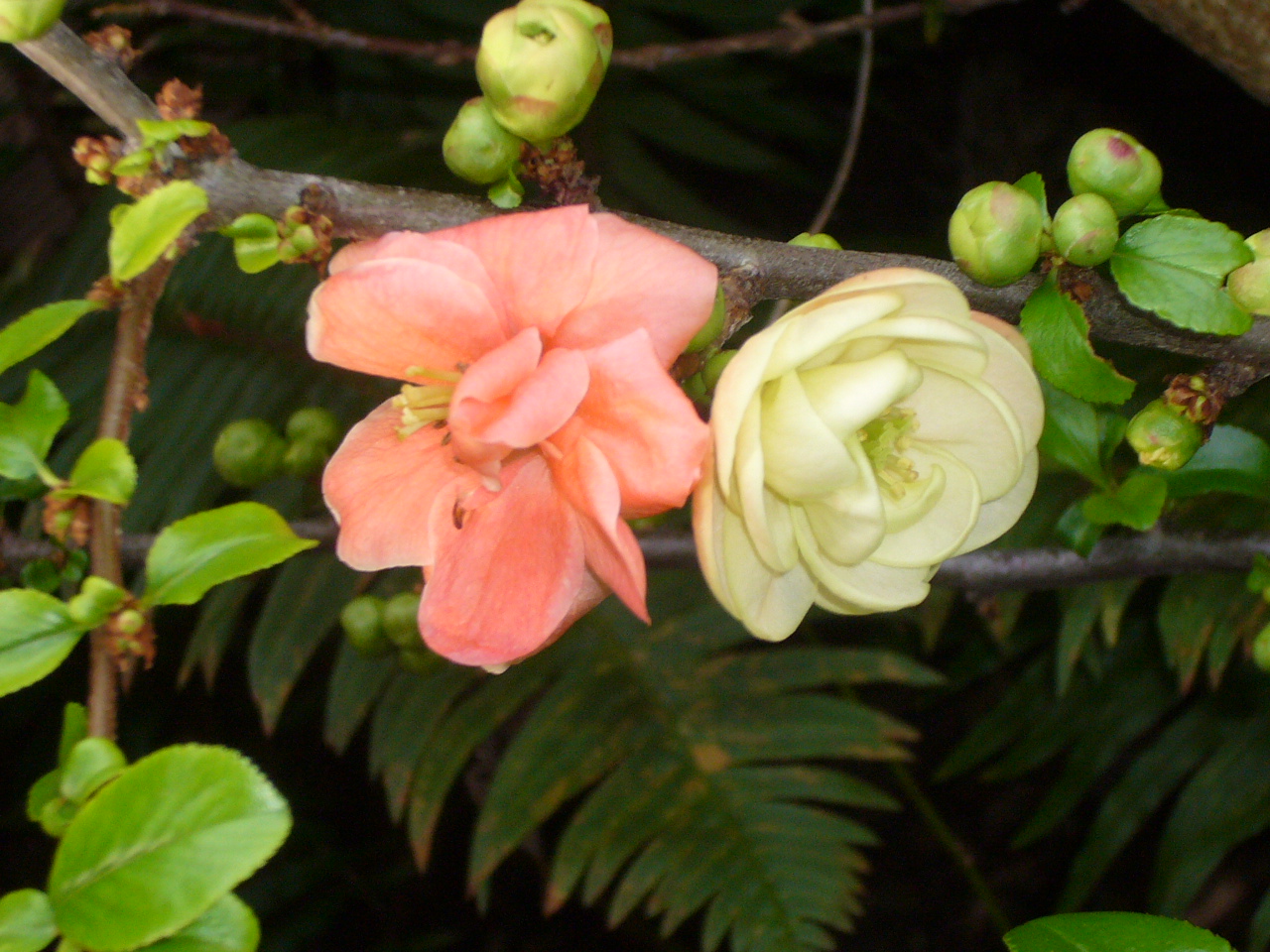 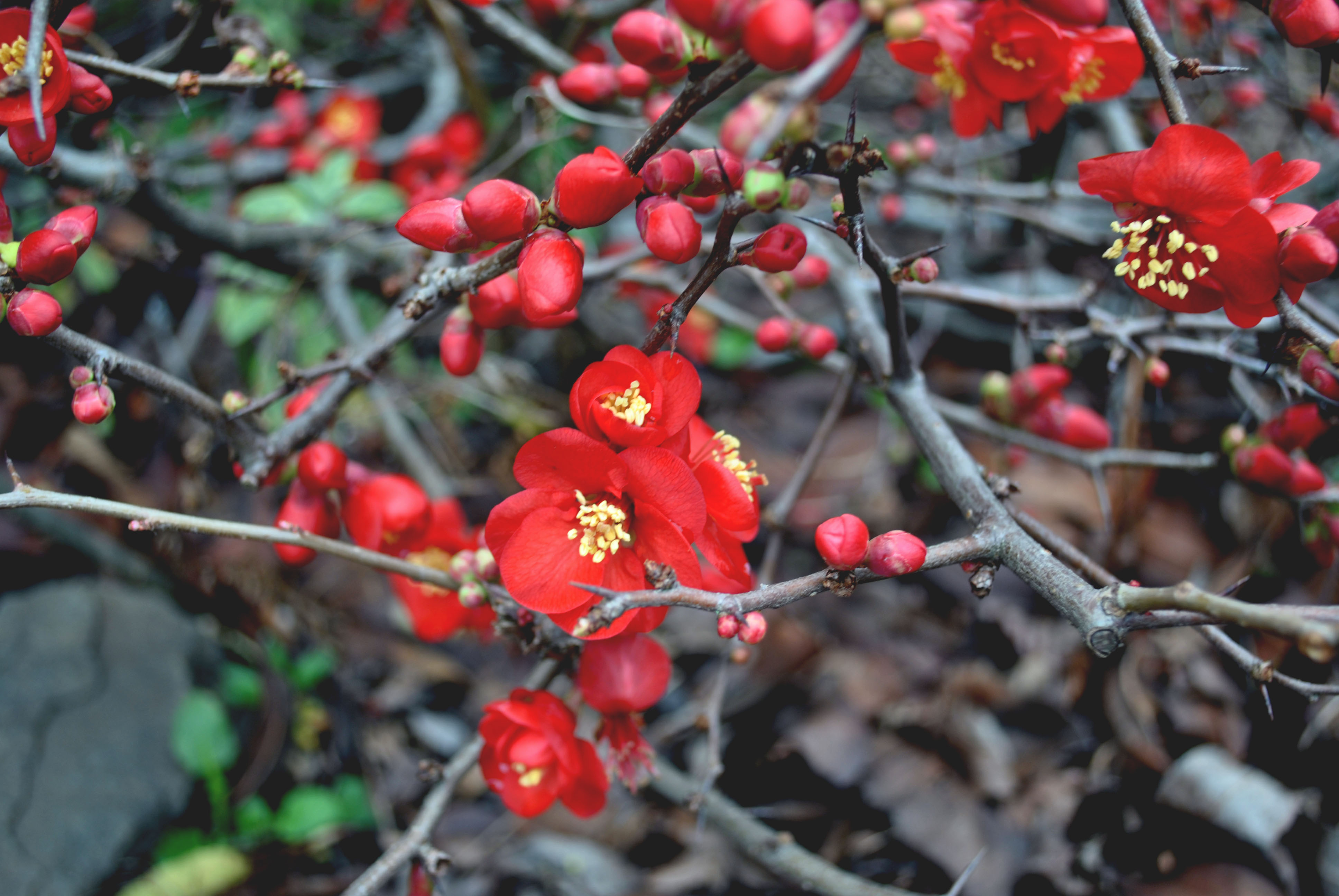 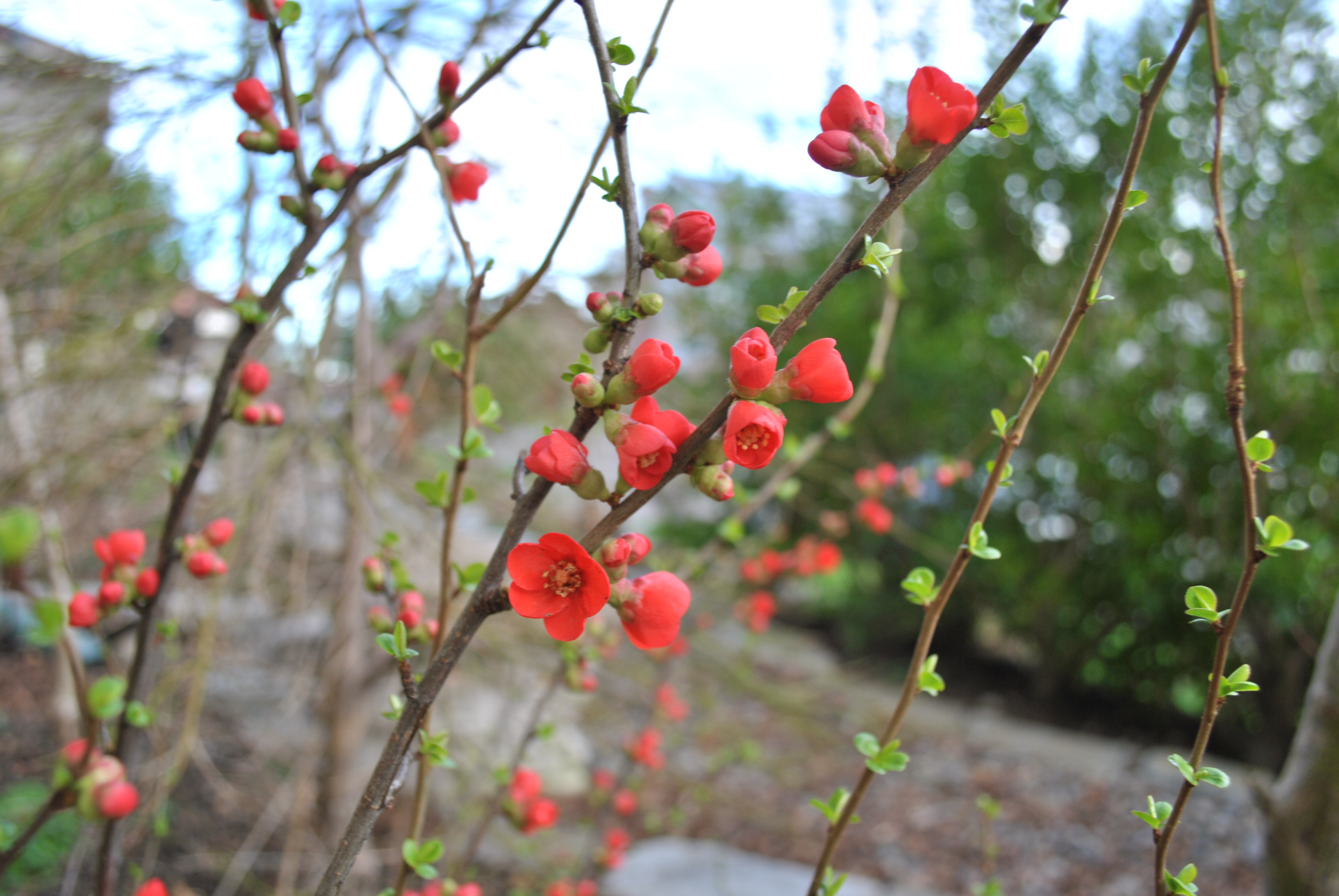 Cameo and Hollandia (both Chaenomeles x superba) both have a spreading and low habit but Hollandia has thorns. Fuji (Chaenomeles japonica) is thornless and has an upright, somewhat vase shaped habit.

The flowers of all chaenomeles darken as they age. With Cameo the difference is quite dramatic. When the buds open the flowers are a pale green white. As they age they turn to a pale peach and then a darker shade of orange. Lovely.

Although they can be planted in sun or part shade, the more sun they receive the more blooms you will have. In my garden Hollandia regularly blooms twice a year. The Cameo and Fuji don’t get as much sun and so far they bloom once a year.

I am currently coveting Chaenomeles speciosa “Yukigoten” – or maybe it’s actually some other variety!